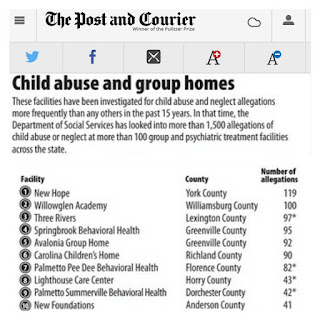 Please click on this link to read the article, Warehousing Our Children by the Post and Courier that discusses the abuse that happened to my child and others.

One of my children was a patient at Springbrook Behavioral Health from 05/29/14-10/19/14. Springbrook Behavioral Health is located at 1 Havenwood Lane Traveler’s Rest, SC.
I received a call from Shannon Childress, my child’s therapist, and my daughter for a family therapy session on Thursday, September 25, 2014 at 3:17pm. I was glad to hear from my daughter because she had not made her regular phone calls that week. It was quickly clear why she had not.
My daughter first informed me that I would be very proud of her because she handled “it” well and used her coping skills. The sad truth is my child is known to lie, exaggerate, and attention seek so I normally simply listen and reflect back what my child has said rather than believe ad act on what she says. The therapist, Shannon Childress, knew this and interrupted long enough to tell me that what my daughter was going to tell me was the truth. My daughter proceeded to tell me the following:
·      A peer spit on staff
·      One staff got angry and was kicking and punching the peer
·      The staff had rings on and made her peers neck bleed
·      Another staff was helping beat up the peer.
·      The peer was lying on the floor while the staff kicked her.
·      A staff got thrown onto my daughter in the process
·      The staff members responsible for the assault were Ms. Benita and Ms. Amanda.
·      The staff members can’t work there anymore.
·      There were multiple other adolescent clients and staff in the gym at the time of the assault.
I immediately ended the family therapy session and asked for details from Shannon. The incident happened on Tuesday. This was not reported to me, nor the police or other governing authorities in a timely manner. I was told they “were going to call the police but I had already done so, so they didn’t.” I was not aware of the incident and did not call the police until two days later. The only positive out of this whole situation is that there is a video of the entire incident.
After explaining to my daughter that I was not upset with her but needed to end the phone call early, I called the Police Department at 864-834-9029 to report the incident. The police department is located at 6711 State Park Rd. Travelers Rest, SC 29690. I was told that an officer would call me back shortly.
At 4:42 pm I called the Greeneville Department of DSS at 864-467-7750 and left a message for a worker to call me back.
At 4:49 pm I received a call back from Officer Tice who stated he had gone to the facility and viewed a video of the incident, that my child was not hurt, though a staff was thrown on her. He stated two staff did assault a client after the client became aggressive. He also stated that he could not give me any more details.
At 5:15 pm a worker from South Carolina Child Protective Services called me back from 864-467-7700 and stated that I could not file a report because it was not my child who was harmed.
At 5:45 I received a phone call from Shannon Childress apologizing for the incident and telling me how great my daughter was handling it. I do not want my child handling another peer being assaulted by adults well. She should not be calm or ok under those circumstances.
Officer Tice, multiple Springbrook staff, and South Carolina Child Protective services told me that the judges in the area were not very considerate of mental illness and that everyone was trying to help the patient who was assaulted by not pursuing it legally since she assaulted staff first.
My child was in a facility to have treatment for mental health issues caused witnessing and experiencing abuse and neglect in her past. Rather than get treatment, my child witnessed more abuse and experienced abuse and neglect by the staff’s failure to report and handle the situation properly. In what way is she not harmed?
What about me? I live with the everyday heartache of having a child who is too sick to live at home. I am forced to trust other’s to provide the care that I can’t. Living with the knowledge that I handed my child to people who would only repeat the very abuse and neglect situations that led to her hospitalization in the first place is overwhelming.
I lay awake at night wondering about the peer who was assaulted in front of my child. The only thing I know about her is that she is in state custody without any parent involvement. I know that like my daughter, she suffers from mental illness. How is she? Who is speaking for her? Why did the South Carolina Department of Children’s Services choose not to press assault charges on the two staff despite there being video evidence? How is it helping a patient to let two staff who brutally assaulted her go free?  Yes, they were fired, but without any legal action or record they may go work in another facility and abuse another patient. This is not a he said/she said incident; there is a video. Even if the video is somehow lost, there is a police officer that saw the video, and a police report (Tice-14-13331).
This story has now made the news. Please keep sharing. With knowledge comes change! Warehousing Our Children

You asked me for space,  but I was squashed with yesterdays and tomorrows.  You begged me for Honor  but I was too focused on peace....