I am an adoptive parent of a very violent young woman (now 18) with severe mental illness. While she has not lived at home for some time now (due to safety for my other children and pets), I am still her mom. I still do everything for her, meetings, appointments, etc...I just do so with multiple staff members from whatever facility she is in at the time.

Sadly, even the many protections offered by group homes, residential facilities, and locked down schools are not enough. She still manages to run away, to seriously harm herself and others (including animals), to threaten, cause chaos, and otherwise be a danger to herself and the community. Last week alone she stabbed herself twice, ran away multiple times, spent 2 hours in a parking lot with group home staff and several police officers refusing to get in the car and return to the group home. Having police show up is normal.

Despite all of those interactions, my child is alive. The police always treat her gently, even when she is being violent towards them and others. She has NEVER been charged by them. She is always taken  to the psyc ER or negotiated with until she gets tired and decides that she will just go lay down. Not do what she is supposed to, she just reverts to silent protests and they leave.

I have stood covered in blood in front of police and her be walked to a police car and transported to a psychiatric ER. I know that I don't have to worry about her being killed by police on one of the many times they have stormed into my home or a facility to get her. Despite the fact, that in those times, she actually WAS a clear danger to me, and them, and our community. Despite the fact that she does resist arrest, refuse to comply with the officers orders, and is generally aggressive and out of control.

As a white young woman, she has the privilege of getting handcuffed and transported to a mental health center. She has magistrates who, "Don't want to charge a child with a crime." She has a society who see her blonde hair and blue eyes and immediately become disarmed, despite the fact that she has a very clear record that should make them run in the other direction.

Being a lover and loved one, being a friend to countless Black people, my God, simply as a human being, I am disgusted, and terrified, and heartbroken, knowing this is the world they continue to live in. Like Brandi Riley said in the video I posted earlier on my Facebook page, we, as white women, have to speak up, to show up, to use our privilege, as repulsive as it is to know it exists, to demand an end to the senseless killing of those in the Black Community!!!!!! 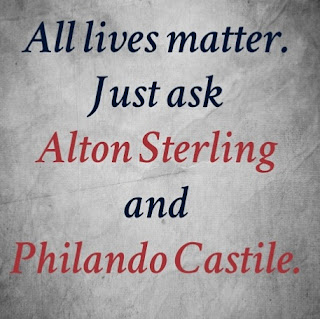