Showing posts from June, 2015
Show all

- June 27, 2015
Wanna know why I hate protests against gay marriage? Aside from ridiculous reason that it should not be a reason to discriminate or hate anyone? Aside from the fact that most people who protest quote Leviticus 18:22 but care nothing about Leviticus 11:12 that says eating shellfish is also an abomination...but I digress... Even if I agreed that same sex marriage was wrong (which I don't), the world is bigger than same sex marriage. In 20 years of church attendance...guess how many times I have heard molestation mentioned? NEVER Guess how many times I have heard child abuse mentioned? NEVER And my girls, they are so sick from both they can never really let me love them. They are so broken, Jesus and healing are a dream never dreamed about. But nobody marches for them. No one protests. And no one makes signs about this one time your dad gave you herpes. And I hate them. I hate them for ignoring victims and protesting consenting adults. My girls never co
Post a Comment
Read more

It's Just a Flag and Other Lies We Believe 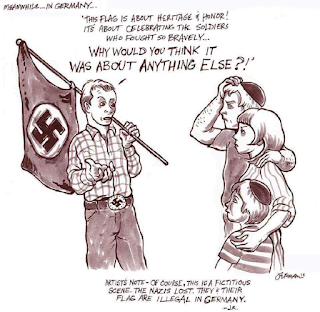 Why I am always in trouble in class...

- June 13, 2015
In one of my most recent classes a student responded to one of my posts and said something to the effect of  " I think it is paramount that everyone has a chance to gain an understanding of what God has in store for them and the plan that he has in mind for their life." And you know me, I agree, but I don't. So once again I send classmates into a tizzy and professors trying to figure out what to do with me and I have resigned myself to being ok with that. I have had the blessing this last semester with a professor who has a past broken enough to get it , so she is atleast not punishing me for being honest.  My response to my classmate was this....  I absolutely agree with you that people need to gain an understanding that God has a plan and purpose for their life. However, what I know that most Christians don't seem to understand is that if basic needs are not met, that plan and purpose is irrelevant to the unbeliever. Even Jesus demonstrated the importance of me
1 comment
Read more
More posts