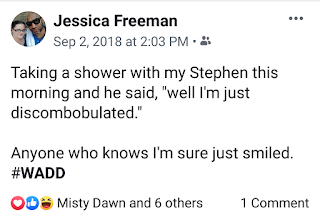 For those who don't know, when Andreana was little, her favorite word was discombobulated. I don't think I have ever heard Stephen say it until this morning so it made me smile.

As for the WADD, when my little sister, Andreana was little she stole a WWJD bracelet from a Christian book store. Oh the irony of that one.
Anyway, when speaking to someone last night I got off the phone upset and remembered that moment. And then I though, it isn't only what would Andreana do, but What Andreana Did Do that matters most now.
- September 02, 2019